The ITHEM Project: No smoke without fire!

“To re-create, characterise and model the fires and their effects in the cave: an innovative programme!”

The traces of fire in the Chauvet cave: from the Thermal Impacts on the walls to the characterisation of the fires, Experimentation and Modelling (IThEM).

The Chauvet-Pont-d’Arc cave in the Ardèche holds the oldest parietal works currently dated. The taphonomic study of this cave has revealed that Palaeolithic Man lit fires that produced a major thermal alteration of the walls and ceilings. The aim of the IThEM programme is to contribute elements to the discussion of the functions of these fires. For that, the project is based on an experimental approach that provides the opportunity to understand the functioning of a hearth in a subterranean milieu, estimate its impact on the rock, on the atmosphere in the cave and on the parietal artworks. The data acquired during the experimentation are subsequently used to model the air flow drawn in by the heat source, the movements of the smoke emitted by the combustion, and the changes caused to the rock.

The IThEM project arose out of research on the taphonomy of the cave walls at Chauvet-Pont-d’Arc, that is the study of phenomena affecting the parietal representations during and after the human presence. The cave notably revealed traces of fire in the form of thermal reddening and flaking, proving that there had been intense heat. Although some decorated caves display remains of hearths and reddening of soil, the Chauvet cave is the first example of a cave where the walls and ceilings were affected by Palaeolithic fires.

These observations raised many questions: was their function domestic, linked to lighting, indicating the way, attempts at protection against animals, or rather the making of pigments? What types of fire (nature of the fuel, intensity) could lead to a reddening and flaking of the rock (temperature in excess of 300°C)? How did men protect themselves from the smoke and gas given off by the combustion?

To tackle these different problems, a series of experiments was conducted in the subterranean milieu. They were carried out in the former Rupelian limestone quarry in the Entre-deux-Mers region at Lugasson (Gironde). The choice of this place had been guided by the requirements to preserve natural subterranean areas in the Ardèche and the presence of most of the team in the universities of Bordeaux. The objectives were to study and model the effects of fire on the rock and on the atmosphere, so as to understand the origin of the thermal impact visible in the Chauvet cave.? 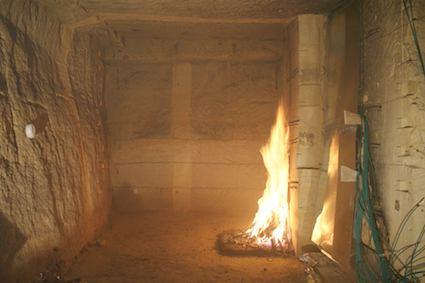 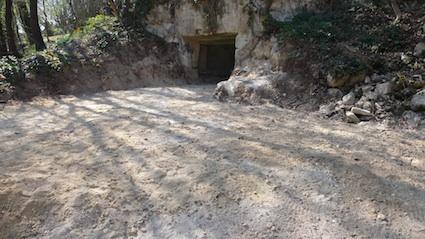 -  In May 2012, a first experimentation took place against the wall of the quarry (Rupelian limestone) following a specific protocol (type and amount of fuel, duration and system of combustion, dimension of hearth, etc). The aim was to observe and understand the impact of a fire on the rock and on the air circulation. This first fire caused reddening and shattering of the rock comparable in nature to the remains observed at Chauvet.

-  In March 2013, preparing for the third session of experimentation, a second fire was lit following a similar protocol, but this time against a wall reconstituted from blocks cut from Rupelian limestone. The objective was to evaluate the differences in the joints caused by the spread of heat and in the transformation of the rock.

-  In July 2013, the experiment was repeated against a wall reconstituted from blocks of Urgonian limestone from the surroundings of the Chauvet cave. This last stage provided the opportunity for assessing the variability of the impacts, depending on the characteristics of the limestone (difference in grain size, composition, porosity, etc).

During these experimentations, the wall affected by the fire and the quarry were measured: the temperature level (air and rock), air speed, humidity of the rock, emission of CO, etc. All these data enabled the temperatures in the atmosphere and the circulation of the air and smoke within the cave to be defined, as well as the spreading of the temperatures within the limestone and the thermomechanical stresses caused. Elsewhere, the measurements on the land and the physical-chemical analyses of the samples carried out before and after the fire enabled the processes responsible for the transforming of the surface of the rock to be defined. The combustion products (ash, carbon and deposits from the smoke) will be quantified and their structure and constituent parts will be defined.

The data acquired in the quarry will enable models to be made that replicate the Chauvet cave. This constitutes the fourth and final part of the programme.

IThEM involved numerous skills mobilised around a common reflection on fire in a subterranean milieu, its impact on the atmosphere or the walls, and its combustion products. Included also are geoarchaeology (the comparison with observations made at Chauvet); geology (characterisation of the properties of the rock); taphonomy (identification of transformation processes); physics (measuring heat, thermodynamics, resistance of materials, mechanics of fluids); digital modelling (air movements, resistance of the walls); archaeology, archaeotechnology (technical aspects of fires and ancient hearths); anthracology (study of carbons) and the study of the soot. This collection of shared views contributes to increasing as much as possible reflections on the function of fires and the choice of their use in certain sectors of the Chauvet cave. 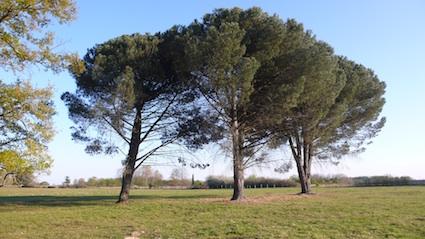 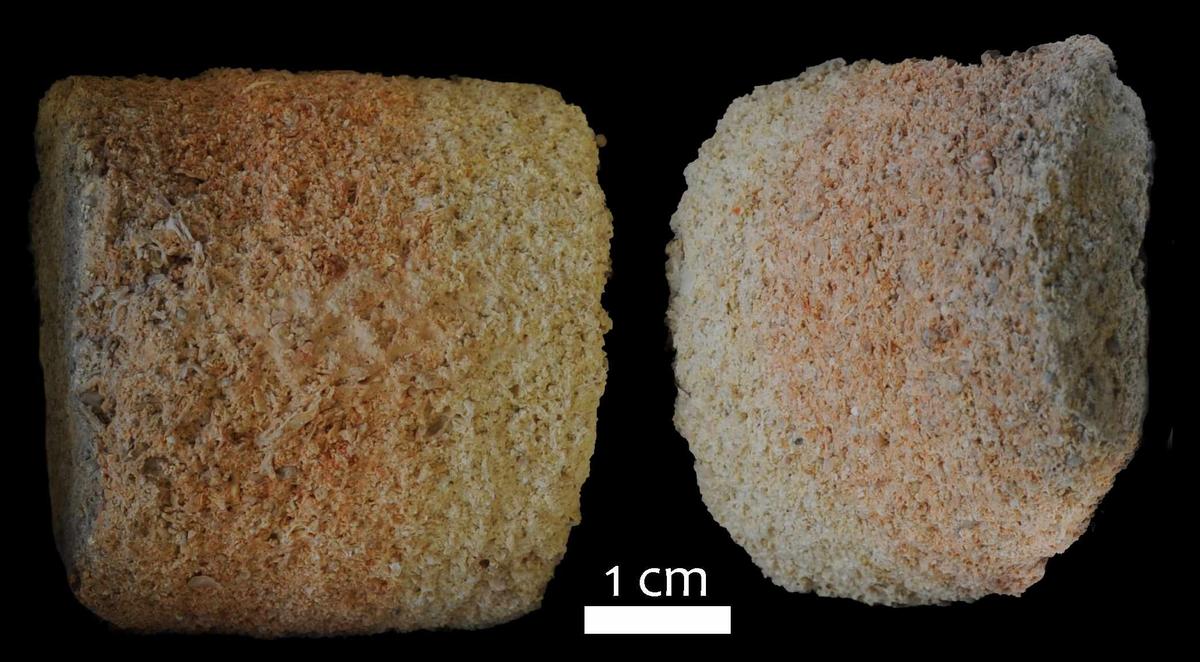