The NEMO project aims to understand the relation between the technical and economic traditions and the human remains during the Middle Palaeolithic period. The objective is to establish a new record of knowledge of the societies of the Middle Palaeolithic period in Western Europe, where human remains will not be considered as elements detached from their archaeological context. 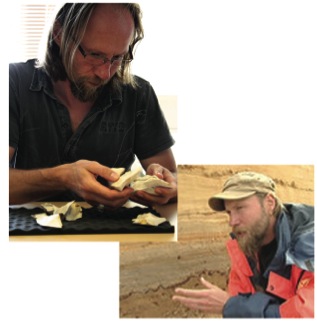 “Behind the object, there is the man…”

The Aquitaine Basin constitutes a special area for studying the socio-economic behaviour developed by Neanderthal Man. In fact, the region has, by itself, yielded 1/3 of the Neanderthal tombs currently known in the world. According to current knowledge, Neanderthals were the first Europeans to bury their dead, an activity among the most significant on a symbolic level. This means that there is a real opportunity to consider the treatment of the dead and the sphere of the symbolic in order to acquire new knowledge about the societies of the Middle Palaeolithic period.

For the first time, the subject is being approached in a multi-disciplinary way, involving Prehistory, Anthropology, Geochronology and the Physics of Archaeomaterials, giving grounds for revisiting our current store of knowledge about Neanderthal Man.

“Behind the object, there is the man…”. This is how Jean-Philippe Faivre, Prehistorian (PACEA), co-initiator of the NéMo (“Neandertal face à la Mort”) research project, summarises it. He is developing a shared view of the material cultures and funeral practices of Neanderthal Man, since behind the study of the object, the way in which it has been made and used, there are people, with their skill, their motivations, their way of life, and their culture.

The project arose out of impassioned discussions between the Prehistorian, specialising in Lithic technology, and the Physicist and Geochronologist Christelle Lahaye (CRP2A), who specialises in the characterisation and dating of sedimentary deposits. The question of chronology is crucial in the understanding of the transmission of skills among Neanderthals: it enables the formulation of hypotheses on occurrences, movement of populations, and contacts between populations. These were many points which the two specialists considered together.

The NéMo project therefore called for extensive work of characterisation and dating by luminescence. The results were combined with archaeological, palaeoanthropological and biostatigraphic data in order to place the different events on their palaeoenvironmental and behavioural context. It is these shared views taken together that will bring a definite added value to the sum of knowledge currently in existence about Neanderthal Man.

“A short time ago, Neanderthal Man suffered from a bad reputation”, explains Jean-Philippe Faivre, “We tried hard to understand how and why he disappeared and what were his links with his successor in Europe, Modern Man. Some credited him with a lower intelligence and less advanced technical approach. Today, we know that things are not that simple. Thanks to this project, we will no doubt be able to learn more about his way of life; his socio-economic organisation; his technical expertise and his capacity for innovation and exchange, and his behaviour regarding symbolic and funeral matters. So perhaps we will be able to accord him a new place beside Modern Man”.

The challenge of the project is to establish correlations between cultural traditions (in the sense of material culture) and the treatment of the dead, through what can be deduced from the presence and study of human remains.

The project consists, therefore, of a revision of burial contexts (taphonomic study), of fossils themselves (nature, how representative they are, traces of stripping of flesh, of carnivores), a re-examination of Lithic industries (systemic determination) and of palaeoenvironmental data (essentially covering fauna, as well as their crossover with data from core samples taken from ice sheets and sea ice). All this will be accompanied by an overall chronological revision.

This promising project will attempt, among other things, to determine if the actions on and around the dead arise strictly out of “abstract” symbolic behaviour, or fall in part within subsistence behaviour. It will also endeavour to determine the links of possible causes between techno-economic behaviour and palaeoenvironmental variations. The project should also provide the opportunity to continue the chronological revision on a regional scale, and to clarify the cultural settlement dynamic of the Aquitaine Basin in the Middle Palaeolithic period and establish its perspective in the context of South-Western Europe.

Picture in categoriesPROGRESS IN THE RESEARCH PROJECTS
TOP