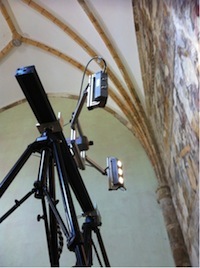 The HYPERSPEC project (Imagerie hyperspectrale et spectrofluométrie appliquée aux matériaux archéologiques – Hyperspectral imagery and spectrofluorimetry applied to archaeological materials) proposes a new approach, based on methods that are usually used, of analysis and the characterisation of archaeomaterials (wall paintings, taphonomy of decorated caves), via the acquisition of hyperspectral analysis equipment.

Hyperspectral imagery appeared in the 1980s. It is defined as: “the acquisition of images in hundreds of contiguous spectral bands, so that a reflectance spectrum can be obtained from each pixel of the image” (Goetz, 1985). It was developed for remote sensing in astronomy, geography etc, and it was first used in the field of cultural heritage in the 1990s.

In 2013, thanks to LabEx financing, IRAMAT-CRP2A acquired a hyperspectral camera for its research project needs.The LaScArBx HYPERSPEC project (Sept. 2013 – Dec. 2014) consists of exploring the possibilities and adaptation of the hyperspectral system for studying archaeological or heritage objects where the it is essential to use non-invasive methods of analysis in situ (a critical issue for heritage) such as for paintings (on walls, manuscripts etc) or decorated caves.

Classic cameras called multispectral that are usually used for analysing paintings produce an image by analysing three components of the visible spectrum: blue, red and green. Hyperspectral imagery enables the acquisition of images from numerous spectral bands simultaneously – up to more than 500 – separated only by a few nanometres. They therefore offer much more information and make a much finer analysis possible (identification of pigments, for example). Also, the information obtained means that mathematical processing (statistics etc) from spectroscopy can be applied as well as the processing specific to imaging. The system is polyvalent, and adapts equally well to studies in a laboratory (small objects, pictures, illumination, reference materials etc), but it has also been designed to be mobile, with a view to applications on external sites (wall paintings, caves etc).

The applications anticipated within the framework of the HYPERSPEC project essentially concern the study of paintings (wall paintings, parietal art etc) and the taphonomy of decorated caves.

Regarding the study of paintings, imagery under UV light enables the observation of fluorescence due to later additions, repainting, organic binders, varnish etc. Retouches appear darker, and the original remains brighter. UV rays therefore reveal the state of conservation of paintings and show if they have undergone repainting. Infrared light reveals the preparatory drawing under a layer of paint, adding information on the degradation of inks, revealing hidden signatures, etc.

The hyperspectral camera was first used in the Région “Enluminures” (Region Illumination) project (2012-2015), concerning the study of the Mediaeval illuminations in the Marcadé Collection (the Bordeaux Cathedral Treasure).

Within the framework of the project, apart from the study of Mediaeval illumination from the Marcadé collection, we have carried out analyses in situ on wall paintings in Belvès (Dordogne) and in Biañez (Biscay, Spain) (in collaboration with the University of the Basque Country, K. Castro, S. Fernandez). 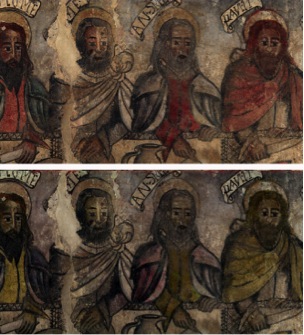 In the study of the alterations and the taphonomy of the decorated caves, hyperspectral imagery enables the characterisation of a specific type of alteration, due to natural environmental conditions or the effect of heating on the walls, The HYPERSPEC project also anticipatesbeing involved within the framework of several LaScArBx research projects concerned with this subject: the IThEM[1], ESPACE GROTTE[2], ArTaPoC[3] projects.