The “Gascon Rolls online” project is a vast programme of publishing the Gascon Rolls and putting them online. They are an exceptional documentary source from the English Chancery Court, preserved in the National Archives (London). This documentary source is vital for the knowledge of the Middle Ages in Aquitaine, and especially for the understanding of the dynamics of territorialisation in Aquitaine during the Hundred Years War. 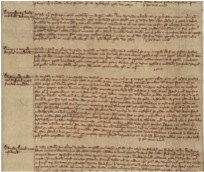 Most of the texts, written in Latin, have never been made public. The “Gascon Rolls online” project is intended to disseminate information about this important documentary collection via a programme of online publication. The first part of the Gascon Rolls (covering the period 1242-1317) had been published on paper between 1885 and 1962, but the work was never finished. The “Gascon Rolls online” project is therefore taking up the study from the Rolls of 1317, in the reign of Edward II, up to 1468, the reign of Edward IV. The project is part of a continuing programme of English research (2009-2011). A first part of the work had in fact been carried out by an English team from the Universities of Liverpool and Oxford, with the technical assistance of the Department of Digital Humanities, of King’s College, London.

In 2012, the financing of the project was interrupted on the English side. The University of Bordeaux 3 took it up, keeping two of the researchers from the former team: Simon Harris and Guilhem Pépin, trained a the universities of Liverpool and Oxford, under the direction of Françoise Lainé then of Frédéric Boutoulle (Ausonius, Université Bordeaux 3), in collaboration with the Department of Digital Humanities.

The project is financed by Les Investissements d’avenir, le Conseil Régional d’Aquitaine, and DRAC Aquitaine, via the Aquitaine Digital Library. Objectives: to continue the series of data, provide a bilingual English-French interface, a cartographic interface, and a “harvesting” procedure. In the DDH at King’s College, the computer scientists Miguel Viera and then Emma Tonkin have special responsibility for these developments.

For Mediaevalists and computer scientists, this programme gives rise to many different jobs: transcribing the Rolls (developing abbreviations in particular); analysing them in the form of abstracts; identifying those involved, dates, places etc, and encoding the analyses in order to index them finally. The Department of Digital Humanities team, under the direction of Paul Spence, has worked closely with the historical researchers to create an encoding template so that the text can be used for searches, indexing and multiple displays.

The programme will continue from May 2013 to 2015 in England, with finance from the Leverhulme Foundation and new collaborations (teams from the Universities of Southampton and Keele, Ann Curry and Philip Morgan).

The principal assets of this project are the important collaboration in the continuity, the international dimension, the strong regional base, the wide interdisciplinary aspect of those involved (Mediaevalists, archivists, computer scientists), and the important involvement of digital Humanities.

In terms of promotion, a transfer is anticipated from the Department of Digital Humanities to the Banque numérique des Savoirs d’Aquitaines (BnSA). The successful conclusion of the project should allow access to the French version of the Gascon Rolls website via the Aquitaine Heritage Portals of the BnSA, which would provide a wide section of the public with “raw” historical data, easily accessible thanks to their formatting and the work of publicising them which enables full understanding, placing these data in their historical context. A glossary of specialist and historical terms used in the Gascon Rolls will also be available, as well as biographical notes on the principal characters who appear in the Gascon Rolls, in particular the senior officers named by the King of England in the Duchy of Aquitaine.