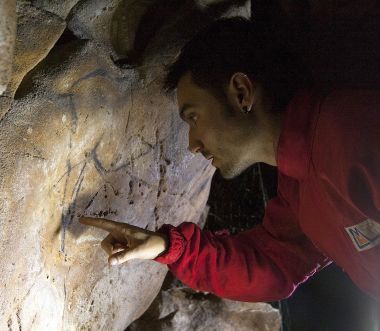 Aitor Ruiz-Redondo (Saragossa, 1985) is IdEx post-doctoral researcher at PACEA and associated researcher at the International Institute of Prehistoric Research of Cantabria (IIIPC, Spain). He is Graduated in History (2009, University of Saragossa), Master in Prehistory and Archaeology (2010, University of Cantabria and PhD in Prehistory and Archeology with International mention and Extraordinary Doctoral Award (2014, University of Cantabria). He has carried out different research stays in international centers, such as Travaux et Recherches Archéologiques sur les Cultures, Espaces et les Sociétés (TRACES - UMR 5608) laboratory at the University of Toulouse II or the Department of Archeology at the University of Belgrade. His line of research is the study of graphic and symbolic productions from European Upper Paleolithic hunter-gatherer societies. In particular, it has explored the issues surrounding the origin of this phenomenon and, above all, the social and cultural circumstances surrounding its disappearance. He is the author of numerous scientific articles on this subject and regular speaker at international conferences on the subject. At the moment he continues his investigations through the direction of the works in different Cantabrian caves, among which highlight Altxerri (Gipuzkoa, Spain) and Las Monedas (Cantabria, Spain), both present in the UNESCO World Heritage List for their relevance.

This project  that he developes at PACEA (BALKARTS) examines the question of the origins of art through the archaeological analysis of Paleolithic sites within the Danubian corridor and the Adriatic Coast.

The emergence of Paleolithic art and symbolism is considered as a major milestone in human evolution. This is related to the fact that art is thought to be one of the first expressions of symbolic and cognitive thought in human history. Traditionally, the development of Paleolithic art and symbolism has been considered a Western European phenomenon exclusively developed by anatomically modern humans (hereafter AMH). Nowadays, whilst there is no consensus about whether Neanderthals created artwork, this possibility suggests that Upper Paleolithic (UP) art and symbolism originated in Western Europe. However, the situation is more complex, and evidence supporting a non-Western European origin for the first artistic expressions has increased in recent years, with the discovery of several Pleistocene (c. 40,000 BP) decorated caves in Australia (Sahul), Indonesia (Wallacea) and South Africa (Late Stone Age, LSA).

The main objective of this project is to find and to document UP symbolic and artistic sites in the Balkans area, especially from early phases of the UP. This is a key area as is the most probable route followed by AMHs to colonize Europe from the Near East, and it is a practically unexplored territory archaeologically. The discovery of Early UP rock art in the region would imply the possibility that this phenomenon had its origins outside of Western Europe, questioning a well-established archaeological paradigm.

To achieve this goal, BALKARTS project proposes the archaeological survey of more than 60 Paleolithic cave sites in 4 countries (Serbia, Montenegro, Bosnia and Croatia) seeking rock art, as well as the excavation of test pits to contextualize the initial evidence found during a recent pilot project (2012).

BALKARTS is totally integrated in LaScArBx’s Research Axis “Expressions du symbolique et espaces de la mémoire” and more specifically in the PACEA’s Research Line “Archéologie de la mort, des rites et des symboles”. It explores the question of the origins of ‘behavioral modernity’ through the search for the genesis of symbolism in AMH.