Trajectories of cultural innovation from the Middle to Later Stone Age in Eastern Africa: Personal ornaments, bone artifacts, and ocher from Panga ya Saidi, Kenya 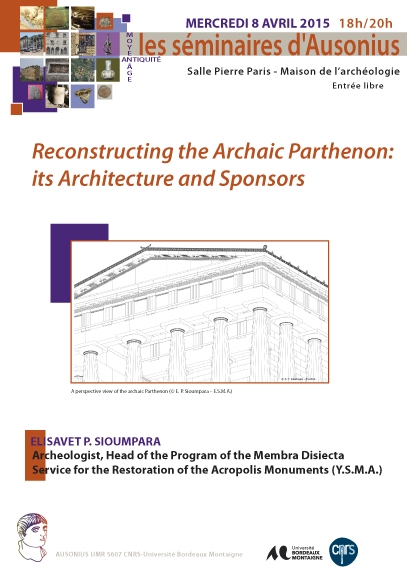 Par Dr. Elisavet P. SIOUMPARA, Archeologist, Head of the Program of the Membra Disiecta - Service for the Restoration of the Acropolis Monuments (Y.S.M.A.), Athens

Reconstructing the Archaic Parthenon: its Architecture and Sponsors

The archaic Parthenon on the Athenian Acropolis is, even today, one of the most   contentious issues in the research of classical archeology. The questions relating to the form and type of the temple, as well as its exact position on the Sacred Rock, have been the subject of numerous and conflicting studies during the past 130 years. The Scattered Architectural Members project of the Service for the Restoration of the Acropolis Monuments (Y.?.?.?.) focuses on the study of all the porous architectural members from the so-called "H-Architektur” or the “Hekatompedon”. This project does not only enable the complete reconstruction of the temple, highlighting once again its unique architecture, but also allows the promotion of new arguments concerning the exact location of the monument on the Sacred Rock. The findings are explored in relation to the archaic Acropolis and Athens and in particular with the institutions or public figures who could have initiated and funded this huge project at the begging ot the 6th c. B.C.